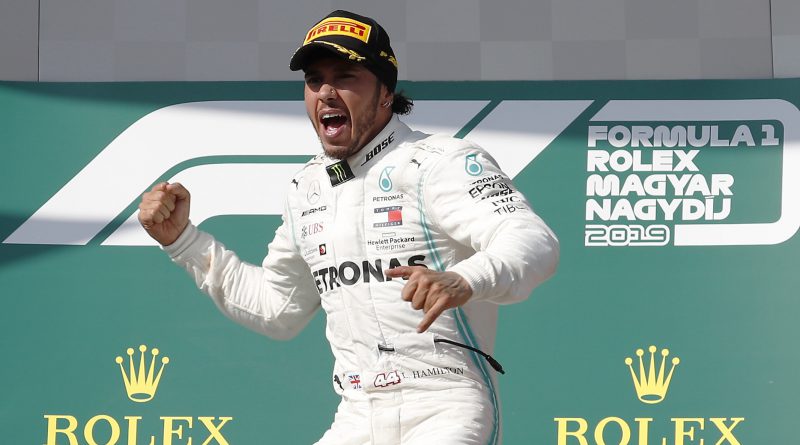 Lewis Hamilton’s stunning drive to victory at the Hungarian Grand Prix “was of a different dimension”, his Mercedes boss Toto Wolff hailed on Sunday night.

The five-time world champion will head into Formula One’s summer break with a mammoth 62-point lead in the championship after he hunted down Max Verstappen before passing the Red Bull star in the closing stages of a captivating race.

The duo, Formula One’s current standout performers, were in a class of two as they diced for the win during 70 laps of compelling action at the Hungaroring.

Hamilton ran off the road twice in his charge for glory before Mercedes rolled the strategy dice.

The Briton was called in for a second time, allowing him to end the race on superior tyres to Verstappen. The challenge, laid down by Mercedes, was for Hamilton to wipe out Verstappen’s 21-second lead in just 21 laps.

It seemed improbable – Hamilton himself questioned the call on the radio – but he turned in a catalogue of spellbinding laps to catch and then fly round the outside of Verstappen at the opening corner with just three laps left.

“In order to dominate an era a team needs to work together on a journey towards creating something special.

“At first it did not seem possible, but as soon as Lewis sniffed the position there was no holding back. It was an unbelievable drive.”

It was a brilliant response from Hamilton just seven days on from his Hockenheim horror show.

He made two mistakes during the rain-hit German race, crashing out from the lead before asking to retire the car. He finished in 11th.

Here, he was back at his remarkable best, taking his 81st victory to move to within 10 of Michael Schumacher’s all-time record. A sixth world championship is almost certain to follow this year.

After team-mate Valtteri Bottas could manage only eighth – the Finn’s afternoon scuppered by a first-lap collision with Ferrari driver Charles Leclerc – Hamilton has the equivalent of two-and-a-half victories in his pocket with just nine rounds remaining when the action resumes at Spa-Francorchamps on September 1.

“It felt like the steepest wall to climb when you come out that far behind,” said Hamilton.

“We talked about strategy this morning and they said that a two-stopper was not going to happen. I was like ‘jeez, I don’t know how this is going to work out’.

“I just had to put all doubt and question marks out of my mind and go for the best laps I could do without dropping any time whatsoever. I had one of the most consistent period of laps. The gap chopped down and I could see Max in my sights.

“The team are very calm when they talk about strategy, but for sure they were nervous as hell that it wasn’t going to work.

“It felt like a big gamble for us. It was a bold, risky strategy call from them. From me, it was just about doing the job. I just had to do the laps. Collectively it was exceptional by the team.”

Verstappen did not put a foot wrong after winning the charge from pole to the first corner. He was gracious in defeat.

“Lewis was on fire today,” said the Dutchman, 69 points adrift of Hamilton in the standings.

Ferrari driver Sebastian Vettel completed the podium places after he fought his way past team-mate Leclerc in the closing stages.

Carlos Sainz was fifth for McLaren, but British teenager Lando Norris finished a disappointing ninth after a slow pit stop.