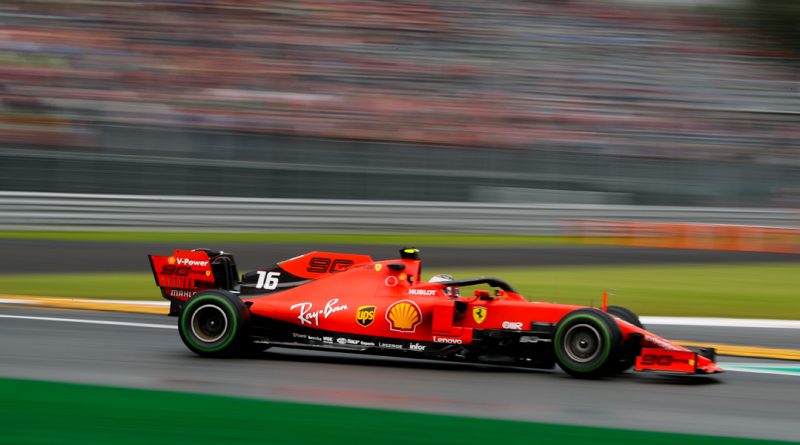 Heavy rain overnight and through Friday morning left the high-speed Monza soaked, with the preceding Formula 3 session only lightly drying the track surface.

Much of the running took place in wet conditions, and with Intermediate tyres required, the 2019 Italian GP practice was halted numerous times.

Alfa Romeo’s Kimi Raikkonen slid wide through Parabolica and made light impact with the barriers, while shortly after the session resumed Sergio Perez went off.

The Racing Point driver lost control of his RP19 exiting the Ascari chicane and sustained substantial front- and rear- damage.

The third stoppage was more brief and was caused when Toro Rosso’s Pierre Gasly spun and stopped through the first chicane.

With around 10 of the 90 minutes remaining, the circuit dried sufficiently for slick tyres to be used, with Leclerc using Mediums to post a time of 1:27.905.

McLaren wound up second and third, with Carlos Sainz Jr. ahead of Lando Norris, while World Champion Lewis Hamilton was fourth for Mercedes.

Sebastian Vettel was eighth for Ferrari, while Mercedes’ Valtteri Bottas took ninth, scuppering his slick tyre run by spinning at the first chicane.

Gasly, after causing the earlier red flag, capped the top 10.

Stay tuned to read more about the results from the 2019 Italian Grand Prix.