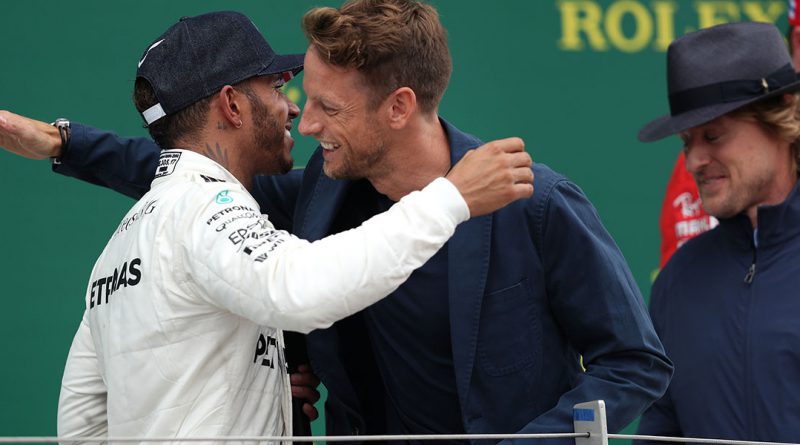 Formula 1 former champion, Jenson Button backs the fact that Lewis Hamilton can rip up the record books and win 10 Formula One titles. Hamilton heads into Sunday’s race on course to take his sixth world title, moving to within one of Michael Schumacher’s record haul.

The 34-year-old, who trailed team-mate Valtteri Bottas in practice at Silverstone on Friday, has won six of the opening nine rounds this year to establish a commanding 31-point title lead.

Hamilton has 18 months to run on his £40million-a-year Mercedes deal, but raised the possibility of a move to Ferrari in his last contract talks.

But Button, the 2009 world champion, believes his former McLaren team-mate should resist the lure of a romantic switch to the Scuderia in what could be the final act of the Brit’s remarkable career.

“Lewis could end up with 10 world championships if he stays at Mercedes, but if he goes to Ferrari it might just be that – the end of his career,” said Button.

“I am sure every driver wants to race for Ferrari, but no driver in their right mind would move from a winning team to a team which is not competitive. It is not like he is not getting paid well. He definitely doesn’t need to worry about that.”

Button became the first team-mate to beat Hamilton over the course of a season in 2011. Hamilton left McLaren at the end of the following campaign to join Mercedes.

Since switching to the Silver Arrows, he has won 57 times, taking his tally to a stunning 79 career triumphs. Hamilton has also won four of the last five championships.

“He truly believes in himself and believes that the people are there to help him rather than hinder him.

“I don’t think the scale of his achievement is being taken for granted either. I see him as a five-time world champion. Yes, he has been given the equipment to do it, but his skill shines through.”

Hamilton’s legion of fans will descend on Northamptonshire with a record crowd of more than 140,000 expected to pass through the turnstiles on Sunday.

Hamilton’s family are also at Silverstone, including father Anthony, who recently revealed that he did not speak to his son for two years after Lewis axed him as his manager in 2010.

The Englishman has triumphed at Silverstone in four of the last five seasons, and Mercedes held the advantage in practice on Friday with Bottas edging out his team-mate by seven hundredths of a second.

The Ferrari duo of Charles Leclerc and Sebastian Vettel finished third and fourth.

Vettel has been Hamilton’s closest challenger for the past two years, but he is already 76 points behind his rival.

Indeed, Max Verstappen moved above Vettel in the championship with his fine drive to victory in Austria last time out – a win which led Red Bull team principal Christian Horner to claim that he has the best driver in the world at his disposal.

“Max is still at an early stage in his career, and it is impossible not to ignore the experience factor.

“Lewis has got more in his bow, and I cannot see anyone stopping him from winning the title.”

Hamilton’s Mercedes boss Toto Wolff was a late arrival at Silverstone. The Austrian team principal has been suffering from a viral infection and missed opening practice, but Mercedes expect him to be fit for the remainder of the weekend.

The British Grand Prix at Silverstone is live on Sky Sports F1 and Channel 4.