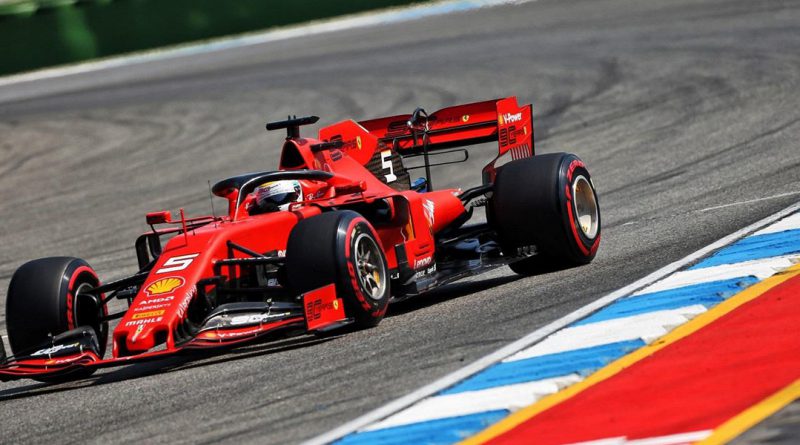 Hamilton was next up, a third of a second slower than Vettel, with Red Bull driver Max Verstappen fourth.

Vettel is back at Hockenheim for the first time since he crashed out from the lead in 2018.

for the first time since he crashed out from the lead in 2018.

The four-time world champion has struggled for form in the 12 months after his accident here. Indeed, it is approaching a full season since he last won a race.

But in the extreme heat on Friday morning, the mercury hitting 36 degrees, Vettel finished 0.255 sec clear of Leclerc in the sister Ferrari, with the Italian team holding an apparent edge over the rest of the field.

Hamilton warned on Thursday that the hot weather will scupper his chances of fighting for victory on Sunday.

Mercedes have failed to get their machinery working at full capacity in the warm weather. In similar temperatures at last month’s Austrian Grand Prix, Hamilton could finish only fifth.

Here, the Briton who leads team-mate Valtteri Bottas in the standings by 39 points, will know he has work to do to reel in the Ferraris if the heatwave extends into the weekend.

Hamilton, however, posted his best lap on the medium compound tyre to indicate there is more speed to come from his Mercedes.

Verstappen finished 0.317 secs adrift of Vettel with Bottas in fifth, almost seven tenths off the pace. In the closing stages, the Finn ran off the road and into the sandtrap at the stadium section, but managed to recover back to the track and the sanctuary of his Mercedes’s garage.

Meanwhile, British novice George Russell held a six-tenth advantage over Robert Kubica in the other Williams. The pair finished 19th and 20th for the British team.

Earlier, the 90-minute session was red-flagged after Haas driver Kevin Magnussen stopped on track with a mechanical issue and was towed back to the pits.