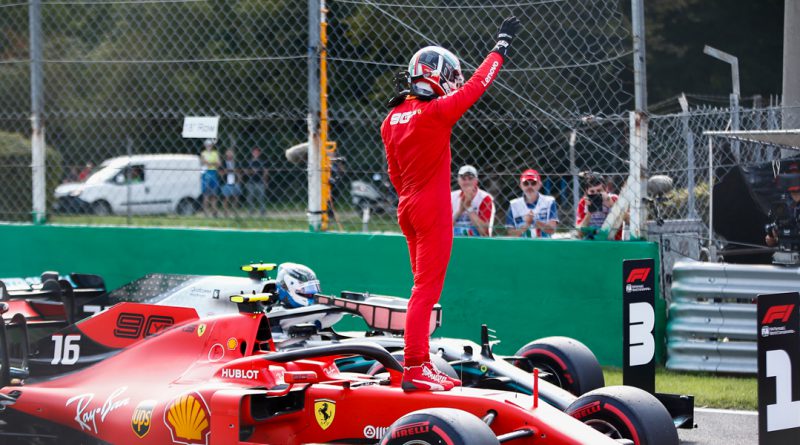 Charles Leclerc took his fourth Formula 1 pole, and twice in as many weeks, during a farcical qualifying session for the 2019 Italian GP.

Leclerc posted a time of 1:19.307 during the early stages of the final shootout to edge Lewis Hamilton by 0.039s, with Valtteri Bottas just 0.008s further back.

That set up a tantalizing showdown but with all of the drivers trying to find a slipstream for their final Q3 laps it created an utterly bizarre situation.

The remaining nine drivers – Kimi Raikkonen was a non-participant after crashing early in Q3 – toured through the first few corners, with several unable to find a way through slower cars.

As the time ticked down only provisional pole sitter Leclerc and McLaren’s Carlos Sainz Jr. made it over the line in time to start a final timed effort.

The remaining seven drivers were not able to register another timed effort during the entire 2019 Italian GP qualifying.

Sebastian Vettel was left in fourth for Ferrari, with Renault having one of its strongest sessions of the year, Daniel Ricciardo fifth and Nico Hulkenberg sixth.

Sainz Jr. wound up seventh, with Alexander Albon and Lance Stroll eighth and ninth, unable to set a time through a combination of Raikkonen’s crash and the Q3 shenanigans.

The events of the final lap in Q3 are under investigation by the FIA, with drivers having previously been warned against carrying out slow out-laps.

Antonio Giovinazzi missed out on a top 10 berth by just 0.002s but could be in line to benefit should the Q3 participants receive penalties for the last lap dramas.

Kevin Magnussen took 12th, in front of Toro Rosso’s Daniil Kvyat; Lando Norris and Pierre Gasly made it through to Q2 but will drop to the back on account of engine penalties.

Haas’ Romain Grosjean suffered an early exit as he fell the wrong side of the cut-off time by less than a tenth of a second.

Williams once again found itself mired as the slowest team, as its high-drag FW42 struggled for pace, with George Russell again comfortably in front of Robert Kubica.

Max Verstappen, already consigned to starting from the rear of the pack due to an engine change, did not set a time owing to a loss of power late in Q1.

It was certainly and interesting qualifying day in Monza for the 2019 Italian GP. Sunday’s 53-lap race is scheduled for 15:10 local time.