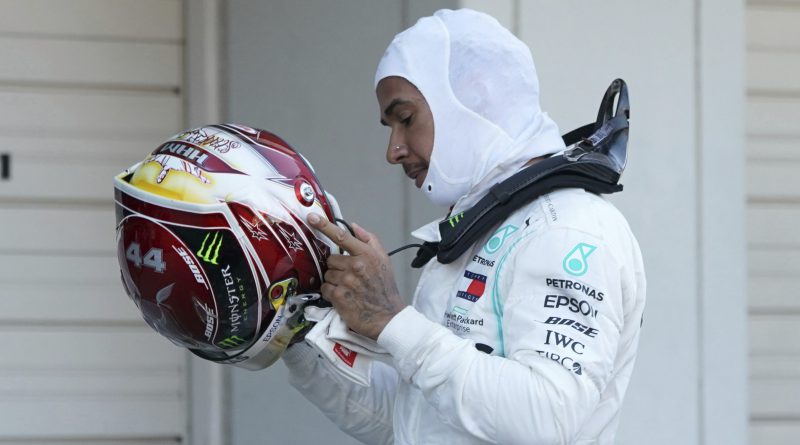 Lewis Hamilton fears he will be made to wait for his sixth F1 World Championship after accusing Mercedes of costing him a bid at victory in Japan.

Hamilton will move to within one title of Michael Schumacher’s record if he wins in Mexico a week next Sunday and Valtteri Bottas, who on Sunday claimed his first triumph since April, finishes fifth or lower.

However, the Lewis Hamilton’s chances of sewing up the F1 championship for a third successive year in Mexico City would have been greater but for a questionable strategy decision – one which Hamilton described on the radio as a “f***-up” – as he finished third.

For the second time in three races, the championship leader was aggrieved to have lost out on strategy. In Singapore, he claimed his pit wall’s failure to react to an early stop by Sebastian Vettel robbed him of an easy win.

Here, Hamilton’s argument was three-fold. First, he lost 10 seconds to Bottas after being kept out on old tyres for three more laps than his team-mate.

Then, Hamilton believed he would have been better off changing to the most durable hard rubber.

And, when he was not, the Englishman thought he should have been told to manage his tyres, not blitz them in trying to catch Vettel, who like Bottas, was on an obvious two-stop strategy. Hamilton finished half a second behind the Ferrari driver.

“That was just a f***-up,” said Hamilton complaining to his race engineer, Pete Bonnington. “How have I lost that much time? I am basically out of the race.”

Despite Mercedes wrapping up a sixth successive constructors’ championship – an unprecedented achievement as a sixth drivers’ title will now certainly follow – Hamilton was in no immediate rush to celebrate.

“I don’t anticipate it will be Mexico where I win the championship,” said Hamilton. “We still have a battle.

“I cannot wait to get back to the UK and see my niece and nephew.

“Today could have been done better. There have been multiple scenarios this year where that has been the case. We should have got a one-two but the strategy was not optimum for me.

“I came out from the pits and realised I lost 10 seconds, and I am like, why? If they told me I would have been that far behind Valtteri I would have said no to them, and stopped earlier.

“Naturally, we will sit and talk to the engineers and strategists. There will be discussions when we get back.”

Hamilton’s Mercedes boss, Toto Wolff, admitted there was a chance the Briton could have made it to the end without stopping for a second time.

“I am not hurt at all [by Hamilton’s complaints],” said Wolff. “Every driver is keen to maximise every opportunity to win and when that doesn’t happen it is frustrating.”

As darkness descended on Suzuka, Hamilton’s mood had started to improve. He joined his Mercedes colleagues in celebrating their landmark achievement with a rendition of Queen’s “We are the champions.”

Hamilton knows it will take something extraordinary to prevent him from sealing the individual honours, too. He is 64 points clear of Bottas with four rounds and 104 points left to play for.

Hamilton had started from fourth – his worst grid position in more than a year – after Ferrari locked out the front row in Sunday morning’s postponed qualifying session at Suzuka following the washout caused by Super Typhoon Hagibis.

Vettel lined up at the front but a slow start ensured he was gobbled up by Bottas. Charles Leclerc then collided with Red Bull’s Max Verstappen, taking the latter out of the race.

Leclerc had to stop for repairs, and was handed an accumulative 15-second penalty after the race, dropping him from sixth to seventh. London-born Alex Albon finished a career-best fourth on an impressive afternoon for the Red Bull rookie.