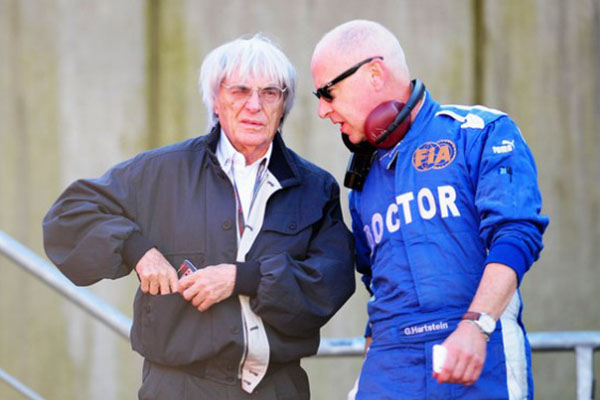 The Formula 1 paddock has always been composed of remarkable characters who have profoundly affected the sport in one way or another.  I had the great pleasure to interview one of F1’s noteworthy gentleman, former F1 medical delegate Dr.Gary Hartstein from his home in Abu Dhabi.  We covered a wide array of topics from his partnership with the legendary Professor Sid Watkins, to the development of concussion protocols, to the state of Michael Schumacher health, to the strains of life in the paddock. Please join me for a small insight into the world of Formula 1 doctor Gary Hartstein.

A little background is in order. Dr. Hartstein is currently a consultant anesthetist in Abu Dhabi.  For 26 years he worked as a clinical professor at the University of Liege. From 1997 to 2004 he was the deputy medical delegate under neurosurgeon Professor Sid Watkins. After Sid Watkin’s retirement as the Formula 1 doctor, Dr. Hartstein was the F1 medical delegate from 2005 until 2012.

The legendary Professor Sid Watkins transformed F1 safety in his tenure as theF1 Medical Delegate. After the deaths of 3 time world champion Ayrton Senna and Roland Ratzenberger in 1994 safety was addressed from a scientific approach. Dr. Hartstein acknowledges that a day does not go by without him thinking of Professor Sid Watkins. As a testament to Professor Watkins friendship and mentorship, Dr Harstsein will often ask himself in professional and personal situations “what would Sid do”.  Dr. Hartstein remembers his partnership with Professor Watkins as “one hell of a good time”.

The serious side of Dr.Hartsein’s job was trying to advance the science of driver safety.  Dr.Hartstein was the chair of the FIA Institute’s Medical Training Working Group whose aim was to standardize training and practices of motorsport doctors. One of Dr.Hartstein’s proudest medical contributions was his involvement, along with Professor Watkins and Indy car medical officials Dr. Steve Olvey and Dr. Terry Trammel, in the development of driver concussion protocols in the form of return to competition criteria. Every major sport now has concussion protocols in place, however until relatively recently concussion was not being given the attention it richly deserved. Concussions are the most frequent injury in motorsports.

Formula 1 is a high pressure sport that sees team personnel travel across the globe.  With the pressure and constant air travel comes the very real danger of serious medical injury. This was highlighted recently by the death of F1 Race Director Charlie Whiting of a pulmonary embolism at the start of the 2019 F1 season in Australia. One of the dangers of long haul travel is concentrated periods of immobilization which can lead to a serious medical condition, venus thrombosis. Dr.Hartstein pointed out that F1 people have a high tendency to get sick towards the end of the F1 season.  F1 drivers are less prone to venus thrombosis due to the fact they are more physically fit and have professional trainers who accompany them around the world, and these trainers specifically design exercises to ward of the negative effects of long haul travel. Team personal, mechanics, PR people, and management who are seated back in economy class are more prone to the dangers of long haul flights.  Dr. Hartstein advises people to hydrate and take periodic walks about the aircraft to help prevent venus thrombosis. It is advisable for those who frequently engage in long haul travel to get a medical risk assessment.

I asked him Dr.Hartstein if he still missed being part of F1. He said that for a long time he really did miss being involved in F1, but now given the chance to return he would not take up that offer. He missed the people, and the work, but ultimately the political machinations soured his enthusiasm for the sport. Part of that disenchantment can be attributed to his poor relationship with FIA President Jean Todt.  They did not get on personally or professionally.  One area in particular that Dr. Hartstein thinks Todt dropped the ball was after the tragic skiing accident of seven time world champion Michael Schumacher. Dr. Hartstein believes the FIA (Fédération Internationale de l’Automobile) should have become involved in using its vast resources to help make skiing helmets the safest in the world.

I asked Dr.Hartstein about the critical injuries suffered by seven time world champion Michael Schumacher and what his opinion was of a possible recovery scenario for Schumacher with the understanding that Dr.Hartstein does not have access to Schumacher or any of his medical information.  Generally speaking the condition of a patient who suffered the same type of brain injury as Michael Schumacher one year post accident will generally remain that way for the rest of their life. Schumacher is no longer in a coma, however his ability to interact with loved ones remains indeterminate. As Dr.Hartstein notes Schumacher may be awake and recognize people or he may be awake with no interaction with people.  It is quite likely we will never know as the Schumacher family are fiercely protective of Michael Schumacher’s privacy.

On a more jovial note I discovered that Dr. Hartstein likes to go carting in Abu Dhabi. Sadly he is currently sidelined from this particular activity due to breaking some ribs in a recent carting accident.  I would like to thank Dr. Hartstein for taking the time to talk to Racing Edge and give us a small window into the life of a Formula 1 doctor. For those readers who would like to discover more about Dr.Hartstein I would highly recommend a documentary by Mario Muth called Gary harstein – I was just a Doctor.

Jason Grunsell is a Supercar Adventure writer and photographer, a Tribal Leader on DriveTribe and F1 fanatic. His passion began watching his first Formula One race in 1979.