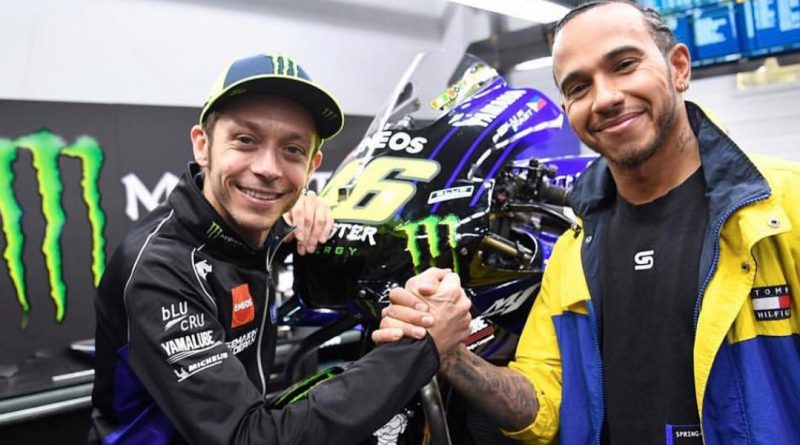 Stop everything you’re doing – Valentino Rossi has announced that a MotoGP/F1 challenge with Lewis Hamilton is in the works. It’s basically the Mayweather VS McGregor of motorsport, and we’re thrilled at the idea.

Now, to clarify this idea was presented earlier in the year but this past weekend at Motegi the two met in the paddock and it seems the conversation progressed. “It’s been a while since we talked about it, it would be a beautiful thing,” said Rossi about swapping machines with Lewis Hamilton.

And it would be a beautiful thing. Whenever we see elite athletes dipping into other sports, we as fans get to see a display of their true athletic capabilities. Beyond the muscle memory of their current sport, how does the athlete adapt to the skills, decision making and physical demands of a foreign sport. As fans we get to enjoy watching, and as athletes we’re sure that Rossi and Hamilton will enjoy the challenge.

However, Hamilton isn’t entirely new to the two-wheel world. He’s had a longstanding partnership with MV Agusta and even tested a Yamaha Super Bike at Jerez last year and put up some decent times. “I’ve always been in love with the bike,” Hamilton said. “But I’m too old to do MotoGP. I’m not bounce-proof like young Marquez!” he chuckled.

And although Hamilton hasn’t yet experience a MotoGP machine, Rossi does have a brief history with F1 cars. Even testing on several occasions with Ferrari and putting up competitive times.

Whatever the times may be, we’re just thrilled to watch the two do their thing. At the moment it’s rumoured that Abu Dhabi’s Yas Marina circuit, where F1 teams begin testing in December, is a prime venue for the matchup.