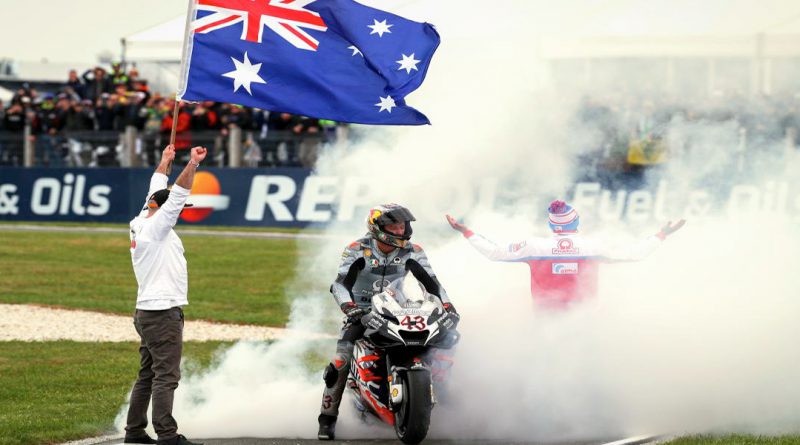 The 2019 Australian MotoGP at Philip Island was far from a conventional weekend, so join us for our roundup on the days events.

On a turbulent weekend MotoGP’s best threw the script out the window and turned on a blinder at Phillip Island. If anyone says they knew what the podium would look like heading into the final lap – they’re lying.

In the end, it was a Marc Marquez win. Cal Cruthlow had a crash here in 2018 that nearly ended his career, but this weekend finished second at Phillip Island, with Aussie Jack Miller scoring third, much to the delight of the home crowd. It took the final sector of the final lap to settle that score, with Miller only just clinching third at the line ahead of a marauding pack of hungry riders.

Maverick Viñales scored pole early in the morning after strong winds cancelled Saturday afternoon’s events. He and Marc Marquez had horror starts, both dropping outside the top five before lap one.

Conversely, the opening lap of Valentino’s milestone 400th motorcycle grand prix couldn’t have been more perfect. Valentino Rossi exploded off the line to lead out of turn one, bringing Andrea Iannone on the Aprilia with him.

After barging past Cal Crutchlow at Lukey Heights in pursuit of Viñales early, Marquez held a watching brief over the Yamaha before pouncing at turn one on the final lap. Attempting a last-gasp pass in the final sector, Maverick threw his bike at the ground – and almost at Marquez – on the way down into MG Corner, and with it his podium hopes.

After a heroic effort to battle into Q2 early on Sunday, the injured Fabio Quartararo didn’t make it out of turn two. Danilo Petrucci launched himself into the back of the rookie sensation who himself was out wide and both riders crashed heavily to the ground.

Cal Crutchlow dragged Andrea Iannone past Rossi in the early phases, before the Aprilia rider swiped past the Briton into MG corner. For the first time in recent memory an Aprilia led a race, but only for three corners as Crutchlow drafted back past.

Some Honda on Honda violence ensued as Marquez barged past Crutchlow over the top of Lukey Heights, eager to keep pace with Viñales. That left Crutchlow a lonely third ahead of the gaggle brawling for fourth.

A Ducati swarm dominated the bunch, and it was Rossi putting up the boldest opposition to a fleet of Italian bikes and riders, with one Aussie and a Spaniard on a Suzuki also in the fray.

In the end, Rossi would finish eighth, behind Andrea Dovizioso with the Aprilia of Iannone sixth and Joan Mir’s Suzuki fifth. Francesco Bagnaia went from 15th on the grid to 5th.

Jorge Lorenzo was last of the runners, a full 1m06s behind the leader in what can only be described as a woeful showing. Johann Zarco, in his first ride on the LCR Honda was 40 seconds further up the road in 13th.

With Petrucci’s DNF and Dovizioso’s seventh in Australia, the Repsol Honda team has closed to just one point behind the factory Ducati Team in the team’s championship, with two races remaining. The next, just one week from today in Sepang, Malaysia.