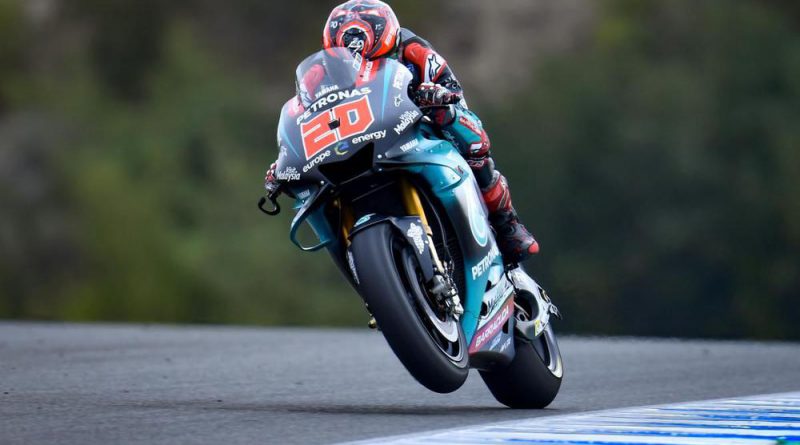 The Top 14 were less than a second apart on Sunday morning at the British MotoGP, and it was now-familiar Frenchman Quartararo who returned to the top of the table. The Yamaha’s 1m59.609s lap was 0.07s better than Marc Marquez who will sit on pole for Sunday’s race.

While Sunday morning warm-up doesn’t mean a lot when it comes to results, the Petronas Yamaha SRT will welcome the confidence boost. He was bumped from the front row of the grid late in Q1 as Marquez, Valentino Rossi, and Jack Miller formed a freight train that helped them set the top three times.

Marquez was clearly pushing during the session, backing his RC213V into turn one aggressively enough to upset the chassis, but in Marquez style was able to wrestle the bike safely through and continue. Miller likewise pulled off a Marquez-esque save. The Aussie tucked the front on the way into turn seven but was able to save the bike on the throttle. The Ducati rider ran off into the gravel at the same spot his engine had expired on Saturday, but this time was able to rejoin.

The news was all bad for Jorge Lorenzo, who was still unable to get under 2m02 seconds as he struggles to regain confidence. Lorenzo has admitted this weekend that he is “riding scared” after fracturing vertebrae in Assen four races ago.

A record-breaking crowd looks set to descend on Silverstone on a day when the weather is absolutely perfect. Hot temperatures, a new surface, and frantic pace will make tire choice critical. We’ll find out who makes the right one at 8am Eastern time.