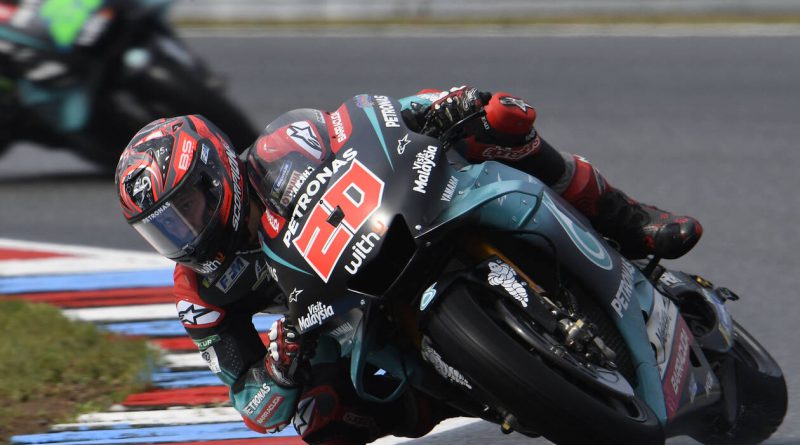 British MotoGP Free Practice 1.- Fabio Quartararo has every reason to be frustrated despite topping FP 1 at Silverstone on Friday. Even after setting a blistering 1m59.952s lap – just a tenth away from Marc Marquez’s outright lap record of 1m59.941 – the Frenchman’s achievements were overshadowed by chatter surrounding Jorge Lorenzo.

Lorenzo will feel frustrated too, after finishing his first session back in dead last with a 2m04s lap that was a full 1.2s slower than Hafizh Syahrin. Lorenzo’s horror season with Honda so far, and the fractured vertebrae that has sidelined the Spaniard for the past four races has sparked plenty of speculation and concern. There was talk of Lorenzo going to Pramac Ducati, and Lorenzo himself admitted he considered quitting altogether during Thursday’s press conference.

Miguel Olivera’s KTM was the first casualty of the weekend, returning to the pits with smoke billowing from the airbox cover just five minutes into the session.

Karel Abraham was the first to test his leathers against the new Silverstone pavement after getting caught out at turn seven. It looked as those Abraham was distracted by a slower KTM exiting turn six and then tucked the front on the way into seven. That new service had some pundits predicting extreme laps times ahead of the weekend, with some even claiming we might see 1m50s laps. That prediction seems premature, but it does feel like this will be a faster weekend than 2017s race. The 2018 British MotoGP was cancelled due to weather, despite having practice and qualifying.

Maverick Viñales likewise fell victim at Stowe corner, turning the front early in the corner in the cool conditions. The Yamaha rider recovered quickly and ended the session with the third fastest time – a 2m00.692s lap – behind Marquez (2m00.538) and Quartararo.

Suzuki’s Alex Rins and Franco Morbidelli made up the rest of the top five ahead of Andrea Dovizioso and Valentino Rossi in seventh.

Quartararo’s lap speed is even more impressive in the context of top speed numbers – his Yamaha could only manage 315.7 km/h in the trap, far slower than Marc Marquez’s Honda at 325.3. In fact, that number was shared by five bikes, the Ducatis of Dovizioso, Petrucci and Miller and the Honda of Crutchlow all setting the benchmark speed. There was bad news for Rossi fans with the Italian’s Yamaha again struggling to keep up with the front runner’s top end speed.

Here are the results of the British MotoGP 1st practice.