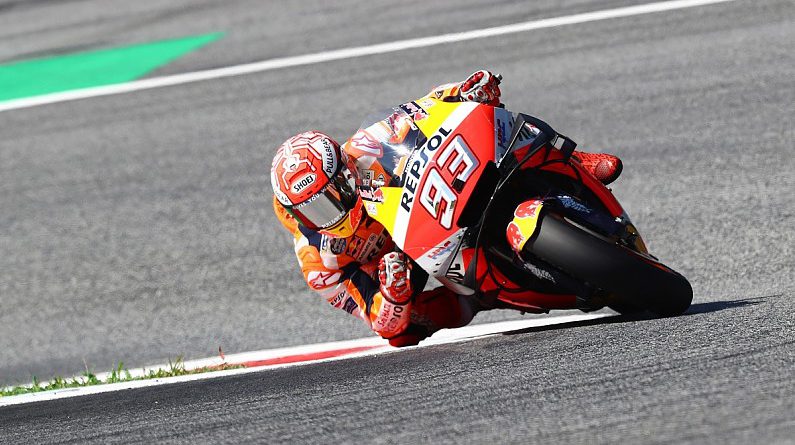 The British MotoGP FP2 was not without its dramas and controversy for all riders. In a session that saw Marc Marquez and Fabio Quartararo once again battling it out at the top, it was the officials who ultimately decided the day.

The session wasn’t easy for the reigning world champion. Just 10 minutes in Marquez had his first crash since Le Mans, losing the front and dumping his Honda on the apex of turn eight. Unflustered, Marquez remounted and returned to pit lane briefly before getting back to the top of the sheets.

Track temps were higher than the morning session at 39 degrees, but as riders spent most of the season on used, hard tires, times were not as fast as FP1 until the final two minutes of the session. Alex Rins and Marc Marquez were foxing with six minutes to go, both running wide in an effort to shake the trail of the other. Meanwhile, Aussie Jack Miller, who only recently re-signed with Pramac Ducati for 2020 began to push, jumping from 15th to 3rd with a 2m00.393s lap.

Valentino Rossi was the first to drop into the 59s, with a 1m59.937, followed in short order by Fabio Quartararo’s 59.225. However those times, and many others were scrubbed for track limits, and as Quartaro pushed to get himself into the top 10 in the dying seconds he had a big front-end moment and lost control of his Yamaha.

Karel Abraham had his second fall of the day after the chequered flag fell, leaving him last on the timesheets behind Jorge Lorenzo. The track limit penalties were more than a little overzealous, and cost Rossi a spot in the top 10. Quartararo was visibly incensed at the end of the session while Rossi’s body language was philosophical.

Despite their prodigious top speed, the Ducatis of Andrea Dovizioso, and Danilo Petrucci could only manage fourth and eighth respectively. Jack Miller again was quicker than his factory Ducati counterpart in seventh, with Miguel Oliveira sixth and Franco Morbidelli fifth.

Marquez, Maverick Vinales and home favourite Cal Crutchlow made up the top three in the British MotoGP FP2.

The combined practice times then left Marquez at the top with a 1m59.476, ahead of Vinales, Quartararo, Crutchlow, Dovizioso, and Morbidelli. Oliveira, Miller, and Petrucci rounded out the top 10 on the day.