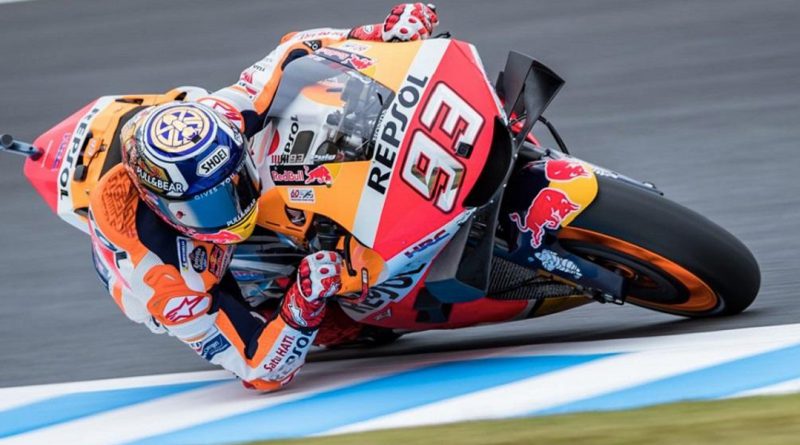 Until now Marc Marquez has never had a pole position at the Twin Ring Motegi circuit. It is the only circuit on the calendar missing from the champion’s list of qualifying results; or rather, it was. Marquez’s last-gasp pole lap in Japan gives him a full hand of poles to add to his devastating list of records.

It took a stout performance against a sea of speedy Yamaha’s for the Spaniard to clinch the pole. Maverick Viñales, Franco Morbidelli and Fabio Quartararo were nipping at Marquez’s heels for the majority of the session, and it was perhaps surprising that the Frenchman was the slowest of that trio for most of it. Indeed, it was Morbidelli who led the Yamaha charge, beating out his teammate for the first time in 2019. It was Morbidelli’s second time this year starting from second place, but the last time he did it Fabio was on pole position (missing it this time at Motegi).

Viñales will start on the second row, the factory rider beaten by both Petronas SRT pilots. Cal Crutchlow’s massive front-end braking moment ruined his chances of a front row spot in the final run to the flag, but he will start fifth after having to fight his way into Q2. His close friend Jack Miller will start alongside him in sixth, yet another example of a satellite rider edging out his factory counterparts. Ducati lead riders Andrea Dovizioso and Danilo Petrucci will start seventh and eighth respectively, sharing row three with Aleix Espargaro on his Aprilia.

Valentino Rossi will be disappointed with 10th behind Espargaro, particularly as the two riders set identical times in the session. Alex Rins and Joan Mir round out the top four rows of the grid. Just 0.853 seconds separate the final 12, but the clear speed advantage belongs to the top quartet of riders.

Morbidelli’s bike seemed to run out of fuel on the way to parc ferme where his Petronas SRT squad were poised to give the Italian a hero’s welcome.

Marquez’s monster stand-up wheelie on the cool down lap was perhaps an indication of his high spirits, as he took pole position at Motegi, and stood in stark contrast to the sullen Alex Rins.

Sunday’s race looks like yet another Marquez vs Quartararo stunner, with Marquez having the slight advantage in pole position, with the added twist of Morbidelli in the fray. Viñales will need to stick with the lead group for longer if he can make any impact on the race, having dropped too far out of contention in the early-mid stages of the previous few outings.

The Japanese Motorcycle Grand Prix at Twin Ring Motegi will get under way at 2am Sunday morning Eastern time with Marquez sitting in pole position.