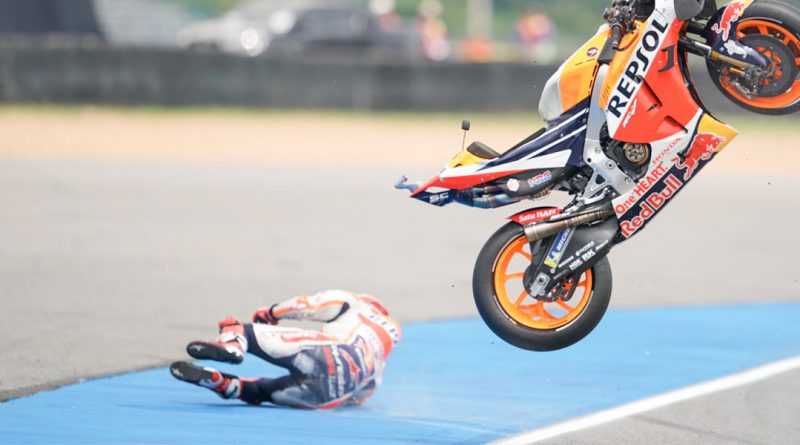 Repsol Honda’s Marc Marquez has suffered a massive crash in FP1 at the PTT Thailand MotoGP on Friday morning.

Marquez was up to speed quickly, setting a 1m31.187s lap within a few laps of the South East Asian circuit and held top position for the bulk of the 45 minute session. Marquez was still atop the points as the world feed commentators ruminated on the Spaniard’s chances to seal the world title this weekend. “He would have to have an almighty fall from the perch to lose the world championship” they mused with around nine minutes left in the session. It was a remark that would in hindsight hold a large amount of foretelling.

With just a few minutes remaining the top runners all headed out to put in one more fast time, anxious to cover off the threat of weather and set a banker lap early in Friday’s running. Marquez was going much slower than usual as he rounded up Pol Espargaro through turn five, cruised through six and tipped in for turn seven. In an instant, the RC213V snapped sideways, ejecting its rider and launching itself high into the air, coming down on the rear section. The violent crash was only captured by Marquez’s onboard cameras, but the sight of the 93 on his hand and knees visibly shaken sent gasps through the paddock.

Marquez, for the first time in a while looked hurt. Even as he waved off the stretcher and attempted to climb onto the back of one of the transport scooters it was obvious the crash had been a heavy one, with at least the wind knocked out of the reigning world champion. It was a surprising one too, given it happened on the out lap, on cold tires, and was an off-throttle highside.

Regardless of the crash, Marquez was able to finish the Thailand FP1 in third place. Fabio Quartararo was just two one-hundredths faster on a 1m31.170, two tenths behind factory Yamaha rider  Maverick Viñales on a 1m30.979.

The Ducatis of Andrea Dovizioso and Jack Miller rounded out the top five with Valentino Rossi in sixth, just half a second behind his teammate Viñales.

Marquez was the only rider to go down in the Thailand FP1, although Viñales also had a moment, his an innocuous run off at turn four early in the running. Jorge Lorenzo ended the session in 19th with a 1m32.838, over two seconds off the pace set by the leaders.