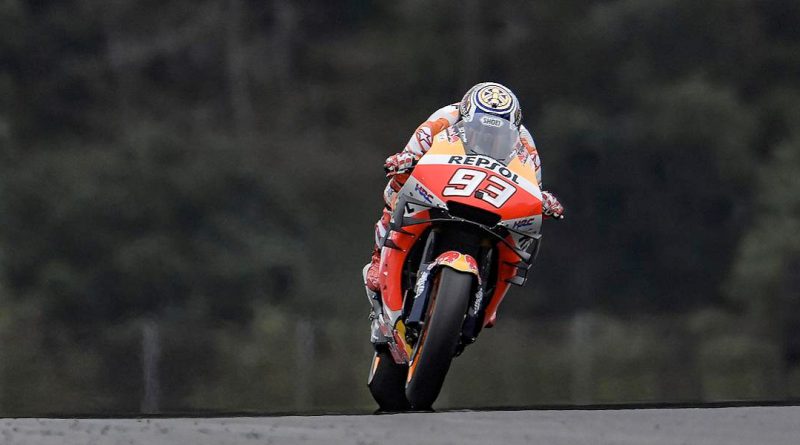 Marc Marquez took advantage of the dry and sunny conditions in Japan to set a blistering 1m45.816s lap in morning warmup at Twin Ring Motegi. In worrying signs for the chasing pack the world champion was over two-tenths quicker than Fabio Quartararo at the end of the session. Alex Rins on the Suzuki was third quickest with a 1m46.282s lap, two tenths back of the Frenchman and four-tenths behind Marquez at the Twin Ring Motegi.

All signs point to a Marquez walkover if you look at the time sheets, but it’s worth noting that Quartararo’s hot lap was impacted by a run off at turn five. The small wobble clearly frustrated the fiery rookie. Quartararo will win the Rookie of the Year title if he finishes third or higher and mostly likely if he finishes anywhere in the points at all. Joan Mir can only keep the race alive if he finished sixth or higher and outscores Quartararo by 10 points – it takes 75 to seal it at the end of Sunday’s race and the Frenchman is leading the Suzuki rider by 85 points heading in.

Second-placed qualifier France Morbidelli was fourth-quickest in warmup, once again edging his factory Yamaha counterpart Maverick Viñales. Valentino Rossi is way back on row four for race start but managed to improve for sixth in warm-up, less than a tenth behind Viñales.

Andrea Dovizioso qualified seventh for the Japanese Motorcycle Grand Prix and was seventh again in morning warmup, but all is not lost for the factory Ducati ace who won the Motegi edition from ninth on the grid in 2017.

Cal Crutchlow, Joan Mir and Andrea Iannone rounded up a top 10 that was noticeable for lacking Jack Miller. The Aussie had qualified sixth but was only good for 17th on Sunday morning ahead of the race. The satellite Ducati team confirmed during the coverage that he was suffering from a tight steering feel in the bike, which can hopefully be sorted come the green flag.

Tito Rabat sustained a wrist injury after crashing in FP3 and took no part in warm up. The Ducati ride will race but will have to start the race from pit lane with a five-second delay after using too many engines already in 2019.

The green flag drops in Motegi at 2am Sunday morning Eastern Time and all signs point to a Marquez breakaway at Motegi.