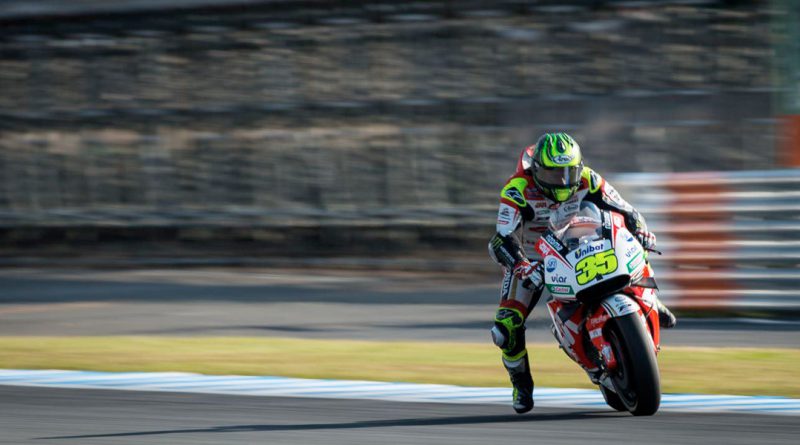 Several riders took advantage of the drying track to qualify for Q2 at Motegi as the clouds began to break in Japan.

Cal Cruthlow saw his first real lap held up slightly by Karel Abraham, but the Briton sliced his way through on the German and still went to the top early. Crutchlow missed Q2 at Motegi for only the second time in 2019 last weekend in Thailand, but was able to avoid that fate today.

Hometown hero Takaaki Nakagami nearly through his LCR Honda away in the final turn on his way to the first 1m47s lap of the session. This will be Taka’s final qualifying effort of 2019 as he heads off for surgery on his shoulder immediately following his home race. He’ll be replaced for the rest of the season by Johann Zarco.

The two Honda riders headed the times until the dying stages of the session, but that didn’t stop them pushing hard for bragging rights in the LCR garage, swapping fastest laps as the rest of the riders slowly wound up speed before Q2 at Motegi.

Alex Rins split the duo for one brief moment but Crutchlow bounced back right as the three front runners embarked on their final attempt at a berth in Q2 at Motegi.

In the end, only 0.34 seconds separated Nakagami from a heroic and popular role, as Crutchlow and Rins topped the session heading into Q2 at Motegi.

Wildcard rider Sylvain Guintoli had been a non-issue after his times were wiped from FP1 and FP2 for going out on a non-homologated 2020 bike. He will start in 21st position on the grid, ahead of Andrea Iannone and Tito Rabat, who sat out the session with an injured wrist.

Hafizh Syahrin will start 20th behind Jorge Lorenzo. Stay tuned for more updates from the Motegi MotoGP after Q2!