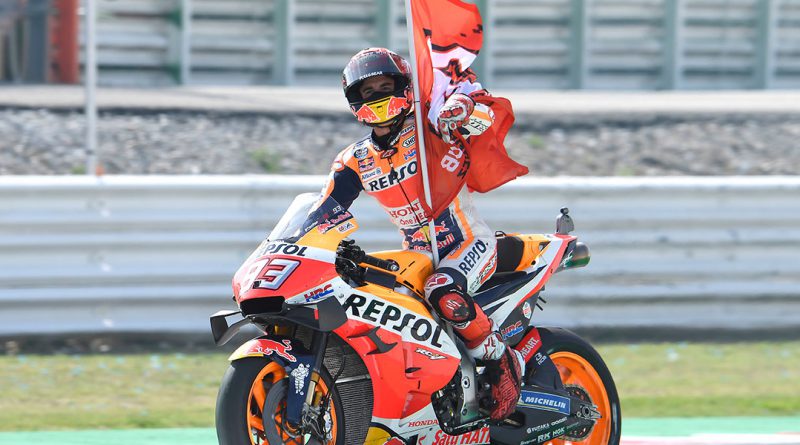 The results of the 2019 San Marino GP are in, and Marc Marquez has given rookie sensation Fabio Quartararo a masterclass in racecraft. The reigning MotoGP world champion picked his line, stalled his pace mid corner and thwarted Quartararo’s best efforts in turn 14 of the final lap, earning himself his 77th victory.

That win puts Marquez fourth on the list of overall winners, ahead of Mike Hailwood, with only Giacomo Agostini, Valentino Rossi, and Angel Nieto ahead of him.

Rookie Quartararo will be smarting after that race, but can rest assured that his arrival in the circle of MotoGP contenders has been well and truly heralded.

The reigning world champion’s decisive moment was classic Marquez, using every bit of his racecraft and experience to disrupt the Yamaha rider’s momentum at turn 14. Memories are long in racing, and Quartararo won’t be caught by that one again.

“It was a tough race. I gave my 100 percent,” Quartararo said after the race. “Today is my first time having a fight with Marc, and we finished close to the victory. I have to say that was the best moment of my career fighting with the world champion.”

Marquez was the only rider who was able to run with and battle the Yamaha horde at Misano. Maverick Vinales was a lonely third, ahead of Rossi and France Morbidelli rounding out the top five. The technical circuit covered off the Yamaha’s horsepower disadvantage and highlighted its strengths.

After starting from pole position, Pol Espargaro was swamped off the line by the Yamahas, and played a role in keeping the rest of the pack at bay as the top quartet pulled away.

At the end of lap one it was Viñales leading from Quartararo, Marquez, Morbidelli, Espargaro, Alex Rins, Rossi, and Andrea Dovizioso. Miller was the big mover on lap one, jumping from 16th on the grid into 9th ahead of Joan Mir.

But it was Maverick Viñales setting the pace. The factory Yamaha rider had the hammer down in an effort to break up the leading pack of Quartararo, Marquez, with a gap back to Morbidelli/Espargaro/Rins and Rossi. The Ducatis of Dovizioso and miller looked to be struggling early on.

On lap three Quartararo pounced on Viñales and tried to generate his own breakaway, prompting Marquez to force himself by Viñales in an effort to stem the bleeding. Quartararo had pulled out a second over Viñales but Marquez methodically pulled that gap back over the next four laps. Viñales’s rhythm has been disrupted enough that the factory rider could only watch as Taka Nakagami was the first faller, tucking the front in turn 10 on lap 3.

Pol Espargaro’s KTM was the cork in the bottle in fifth place causing a frustrated Rins to run off track in an attempt to get by. It took lap six for Rossi to get past the KTM and move up into fifth, freeing him to hunt down the satellite Yamaha of Morbidelli.

It took another two laps for the factory Ducati of Dovizioso to get past the KTM and set off after the duo ahead.

There were only 13 laps to go by the time Rins made it stick on Esparagaro, and Miller nearly went down trying to follow the Suzuki rider through. Rins’s didn’t stay ahead of Espargaro for long, he was given the notice of a long-lap penalty but never served it, instead crashing out at turn four. That crashed looks to have cost Rins third in the world championship.

Rossi and Morbidelli traded places a few times in their battle for fourth before Rossi made it with 10 laps to go. Meanwhile Vinales mounted a resurgence in third. After letting the lead duo eke out a 2.6 second gap early in the race, the Spaniard started to reel them back in in the final third, but the gap looked to be insurmountable.

Instead, Viñales settled into a lonely but much-needed third, ahead of his popular teammate Rossi in his third-straight fourth-placed finish.

Others had a more tough result at the 2019 San Marino GP, Italian test-rider Michele Piro crashed out late in the race, leaving Dovizioso, and Petrucci as the only factory Ducatis. Cal Cruthlow’s difficult weekend also ended in the gravel trap soon after.

The overwhelming sense of a calm before a storm brewed, and the first big drops of metaphorical rain appeared with two laps to go. Marquez flashed a wheel at the rookie ahead, but couldn’t make a move until lap one on the final lap. Marquez pounced, but Quartararo sliced back by at turn four. Marquez made a decisive pass at turn eight and looked to be free and clear in the lead. Quartararo had one more run at the Honda in turn 14, but Marquez had the line blocked and Fabio was lucky to stay upright.

That gifted an emotional victory to Marquez, yet another stunning result for the multiple-time world champion at the 2019 San Marino GP. Marquez now heads to Aragon with one hand firmly on the world championship trophy.