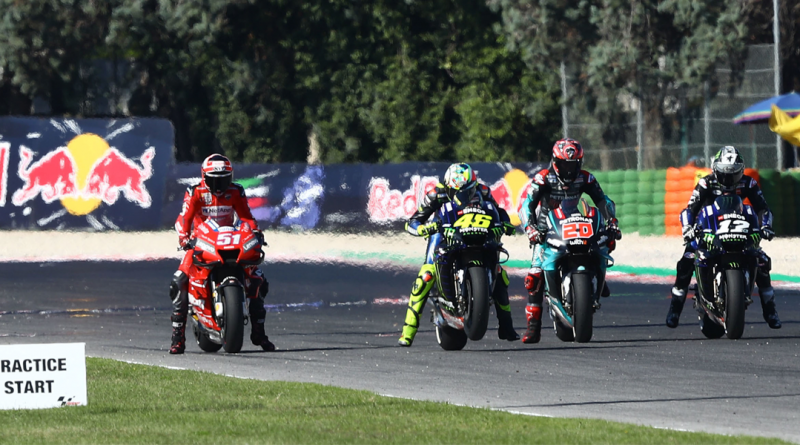 It was an electrifying end to Q2, ahead of the San Marino GP with unexpected finishers and a classic rivalry flareup.

Maverick Viñales continued to impress as he found the fastest pace of the day, putting his factory Yamaha on pole position for Sunday’s race.

An ecstatic Pol Espargaró will be second on the grid. The Factory KTM rider crossed the line a mere .259s behind Viñales. His teammate, Johan Zarco, will sit eighth on the grid as he continues his season’s struggle.

Satellite Yamaha rider Fabio Quartararo flanks the first row, with teammate Franco Morbidelli just behind him leading the second row of the grid.

Marc Marquez, who pitted twice during the top qualifying session, couldn’t manage to find his race line on the technical Misano track, going wide on his final attempt. This left him in fifth at the end of qualifying.

What Marquez did manage to do was get in the way of Valentino Rossi on his final qualifying lap. After hitting the green paint, Marquez continued to push for pole in vain, eventually impeding the hometown riders attempts to find a spot on the first row. Rossi sits in seventh position for tomorrow’s race.

Andrea Dovizioso had the sixth fastest time at the end of qualifying, as his Ducati continues to lag this weekend behind the Japanese bikes.

Suzuki’s Alex Rins, last round’s top rider, found himself just ahead of his teammate Joan Mirr, rounding out the top ten spots of the day.

LCR Honda rider Takaaki Nakagami and Ducati’s Michele Pirro finished eleventh and twelfth respectively ahead of what will surely be an exciting San Marino GP.