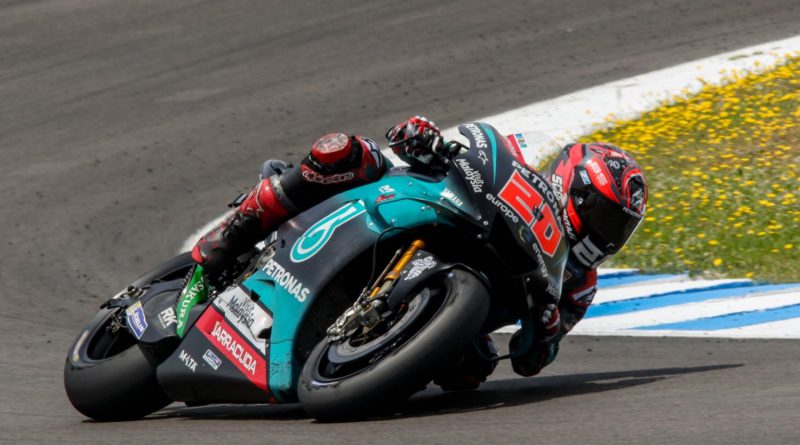 The relative calm of Free Practice 4 and Q1 at the Thailand GP was well and truly banished in Qualifying 2. Lap records and riders alike tumbled in quick succession as the Chang International Circuit came under assault.

Marc Marquez was the first one to go quickest, tickling the lap record on his second flying lap. Valentino Rossi threw his Yamaha at the ground at turn five, folding the front before jumping to this feet and running back to the paddock for the spare bike.

Fabio Quartararo posted the first sub 1m30 lap with nine minutes left in the session, his 1m29.920 the first lap to set a new lap record in the session. Marquez went under the existing lap record just moments later but his time was a few hundredths slower than the Frenchman ahead. Maverick Viñales was determined not to let his satellite Yamaha counterpart upstage him in this session. The factory Yamaha was visibly ragged and Viñales couldn’t keep it on the legal side of the curbs on his first proper attempt at a flyer.

Quartararo ran wide with three minutes remaining, only just catching the bike with his outside foot off the peg before composing himself and taking another run.

Marquez threatened, the world champion elect up a 10th at the end of the first sector, but undid himself in the end. As Quartararo set a stunning 1m29.710s lap time Marquez was sliding through the gravel trap in turn five. Marquez was way too hot into the corner and lost control early on, pitching himself out of contention for pole.

Maverick Viñales was only 0.050 behind Quartararo in the third sector and looked threatening but could only manage second fastest, just ahead of Marquez and Franco Morbidelli.

Even after the chequered flag and even with pole position, Quartararo kept pushing, and he too fell at turn five. The Frenchman could win a gymnastics medal with his spritely dismount and recovery, bouncing to his feet with style.

Pol Espargaro hung it all on the line chasing Marquez but could only manage 11th, one spot ahead of brother Aleix.

The front row than will see Quartaro line up on pole alongside Vinales and Marquez. Franco Morbidelli will lead row two ahead of Danilo Petrucci  – who was able to squeeze into Q2 with a solid effort in Q1 at the Thailand GP.

Andrea Dovizioso’s hopes to keep his title alive took a hit with his seventh-placed qualifying position, he’ll start from row three alongside Suzuki’s Joan Mire and Valentino Rossi. The Italian will also be frustrated with his session after falling early.

Alex Rins will head the fourth row of the grid next to the brothers Espargaro.

Green flag for round 15 of the 2019 MotoGP world championship, the Thailand Motorcycle Grand Prix will drop at 3am Easter Time on Sunday morning.