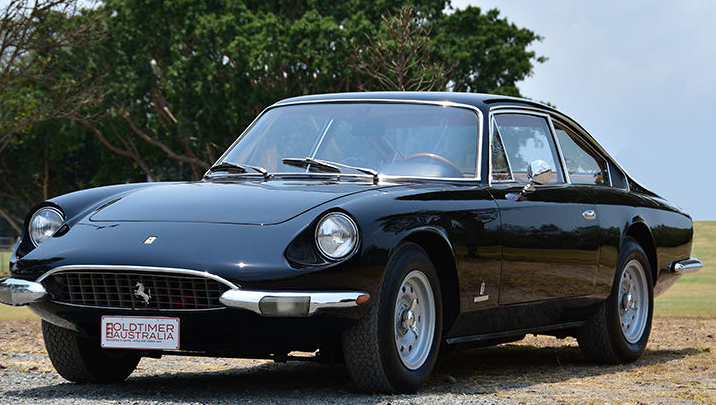 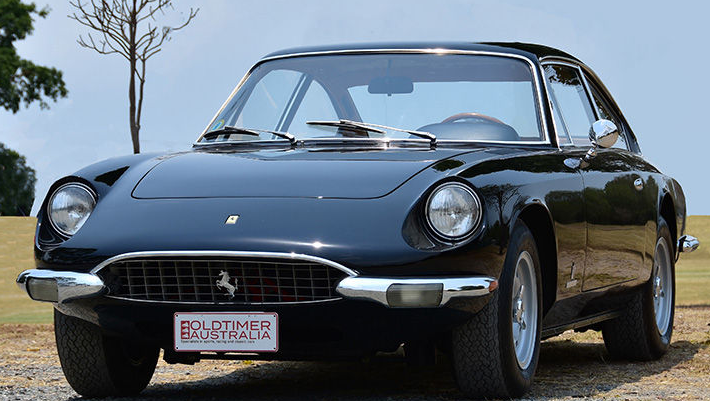 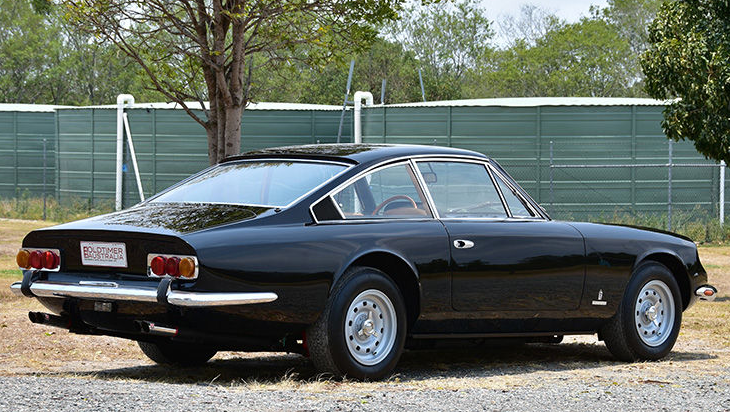 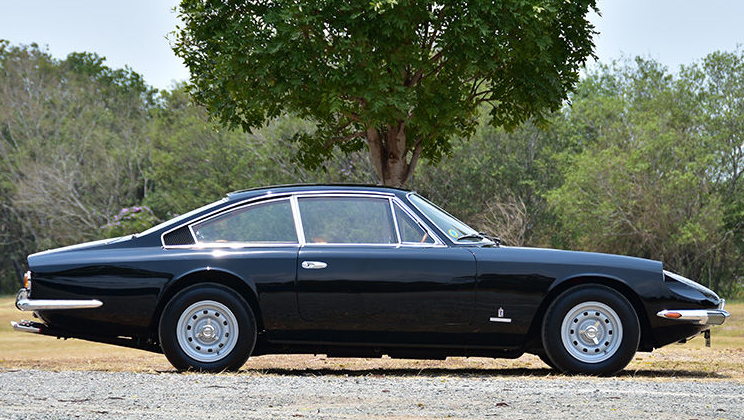 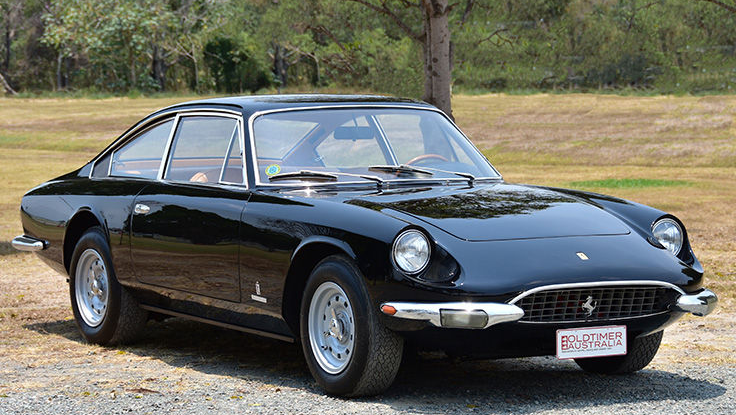 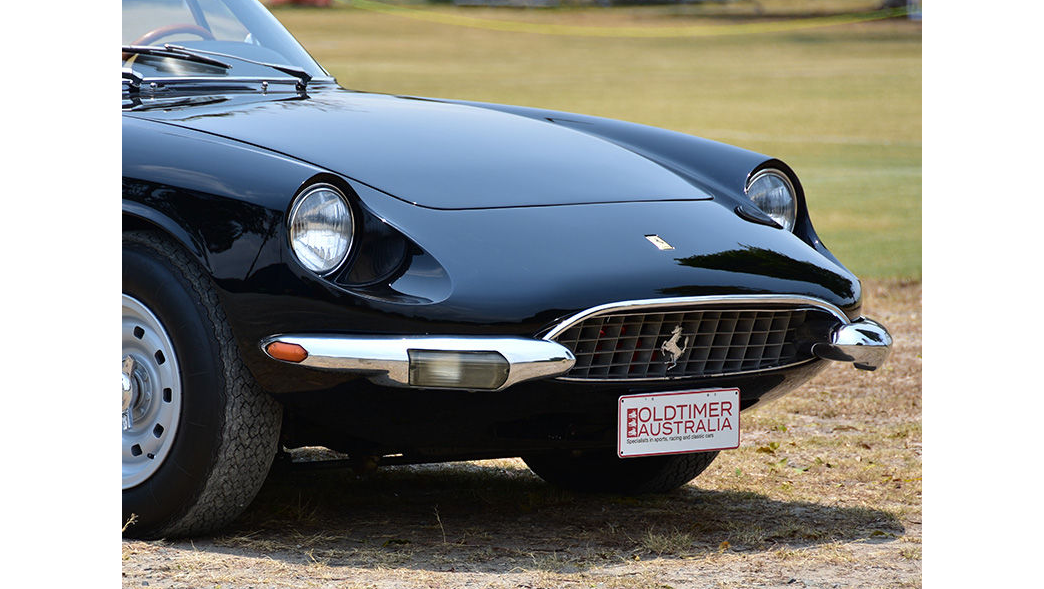 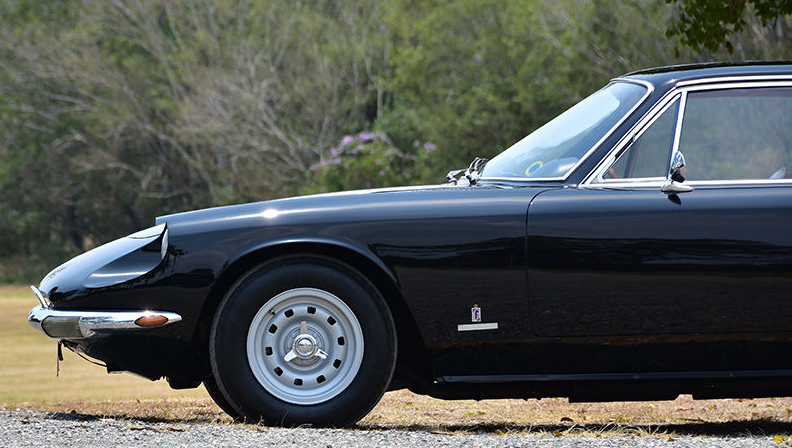 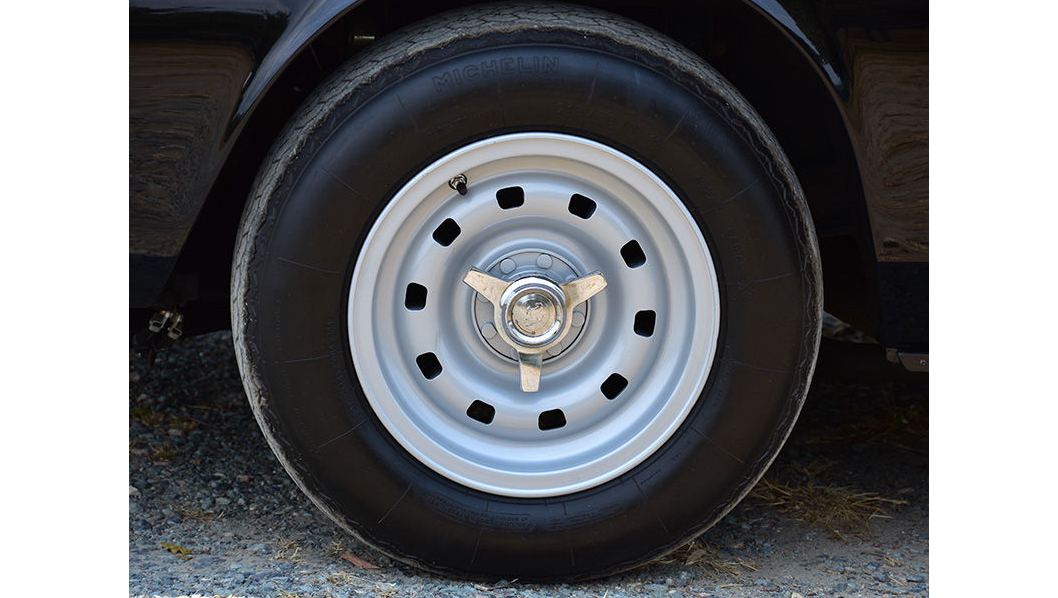 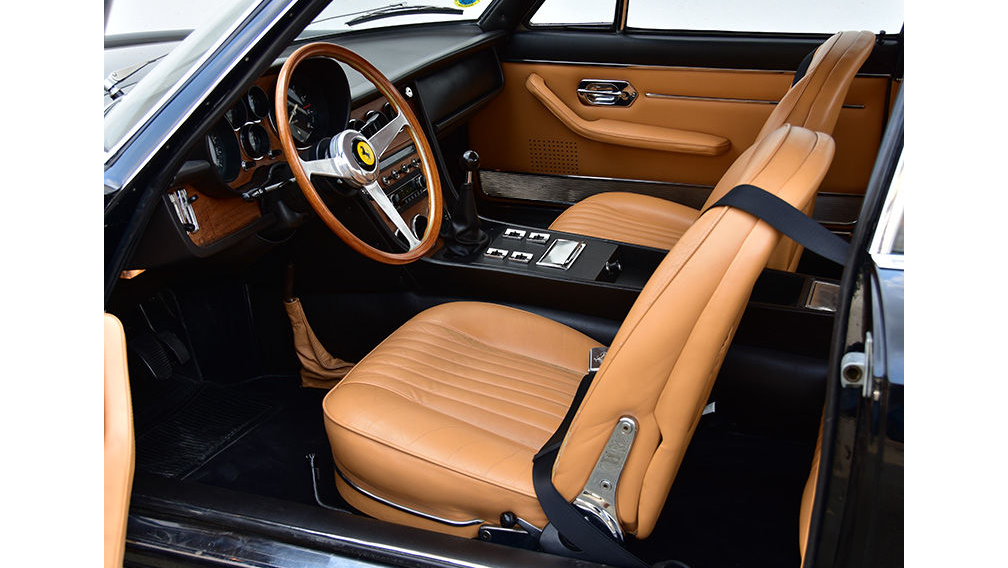 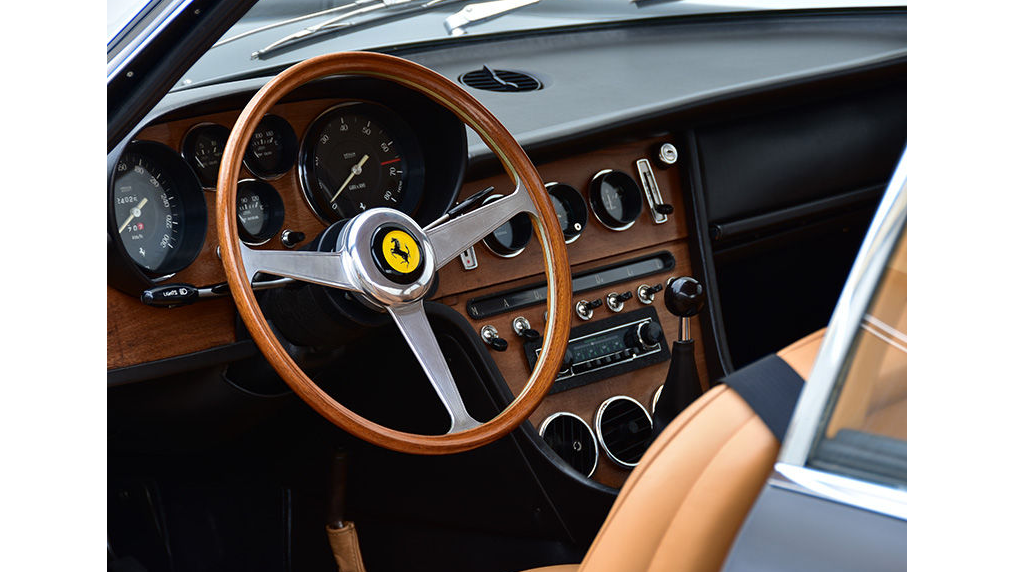 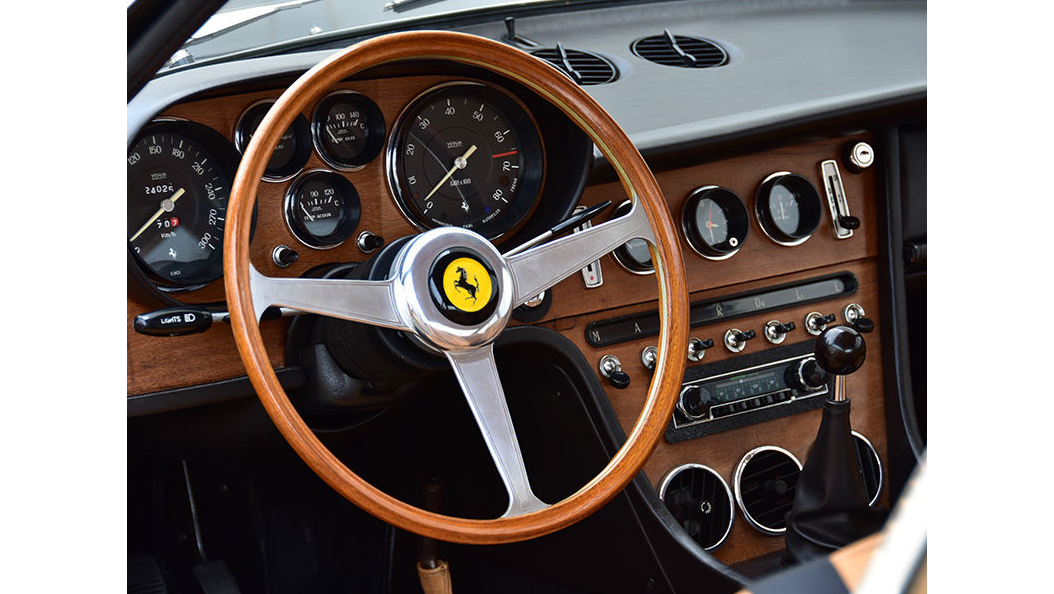 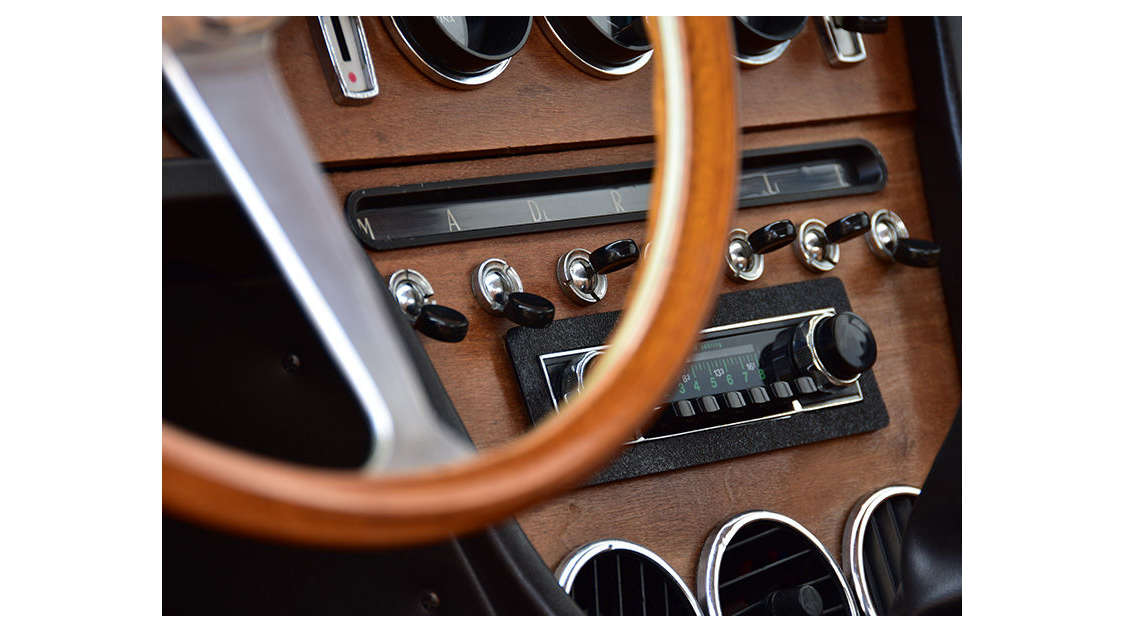 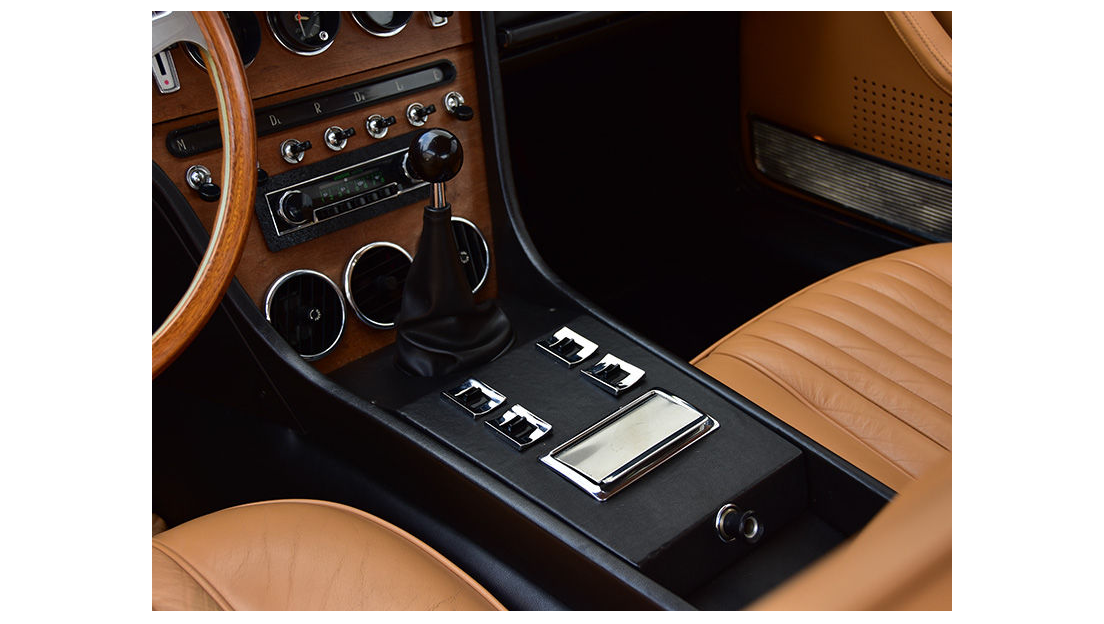 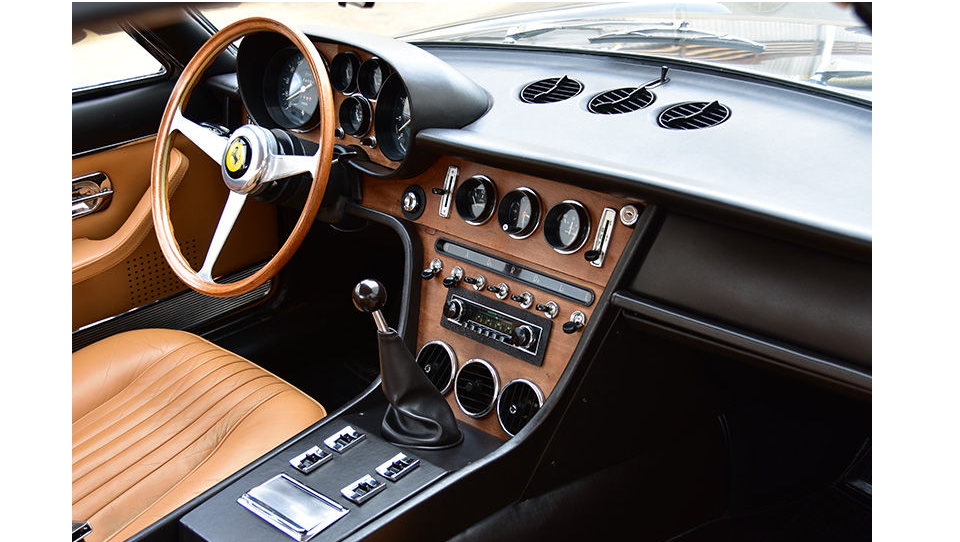 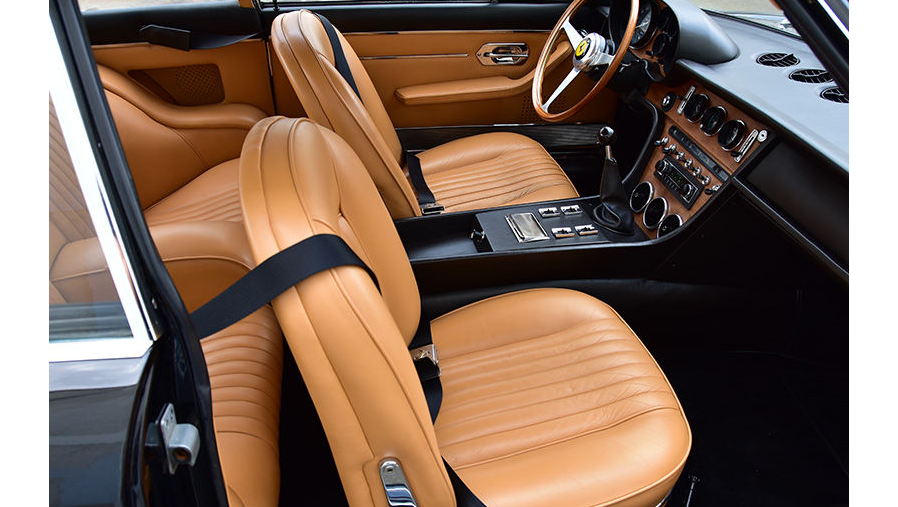 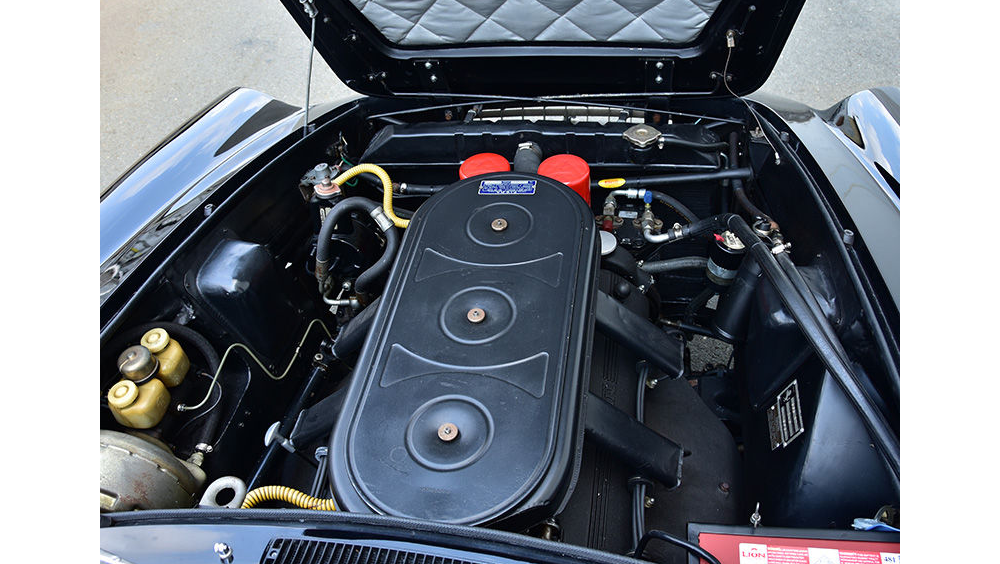 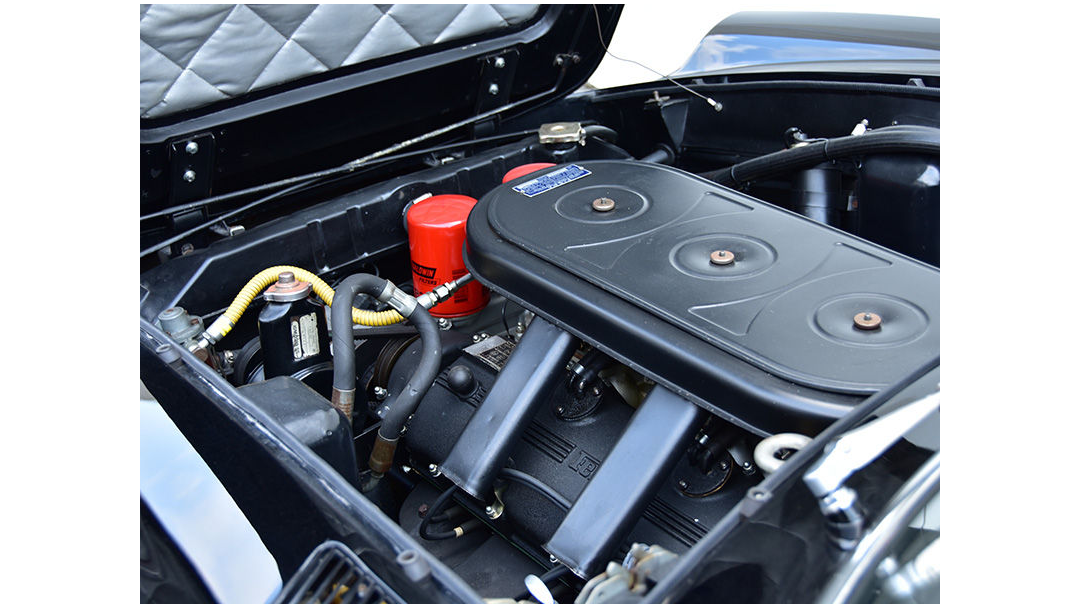 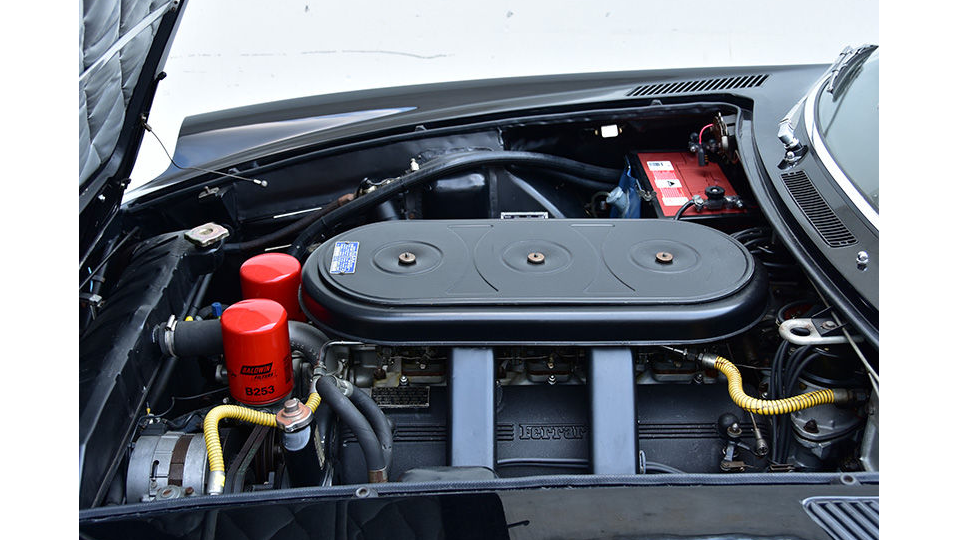 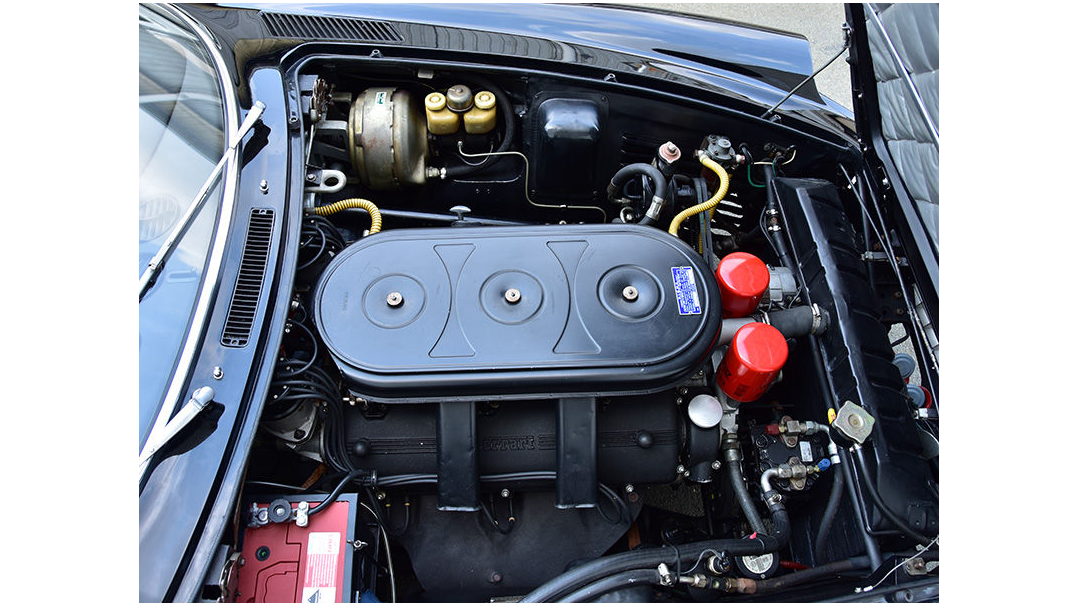 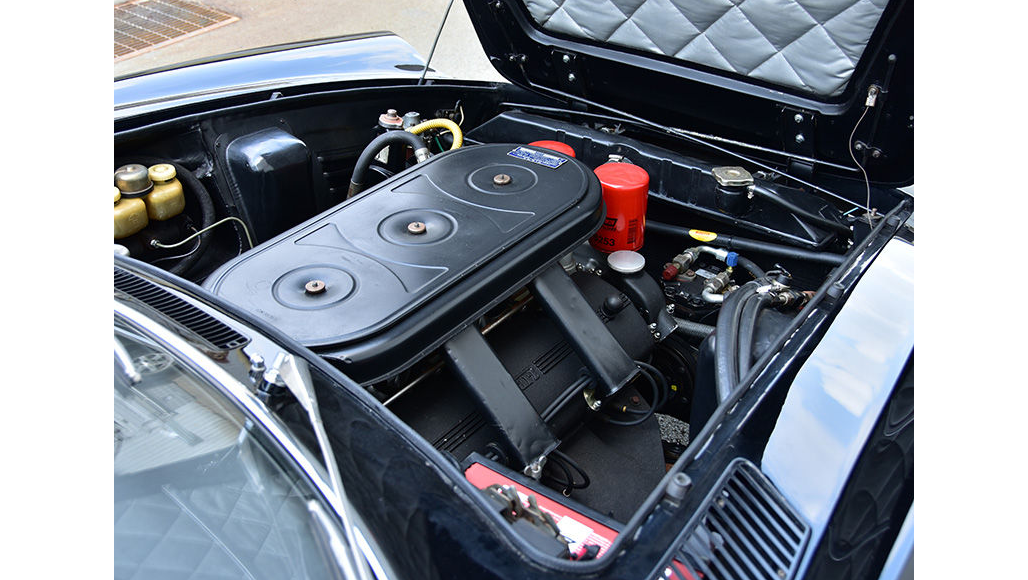 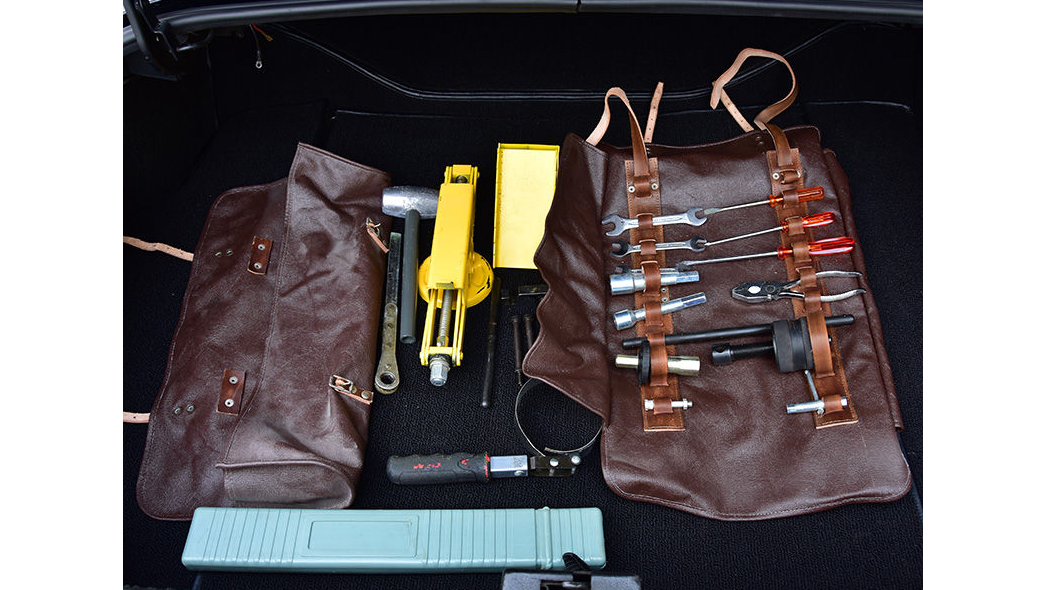 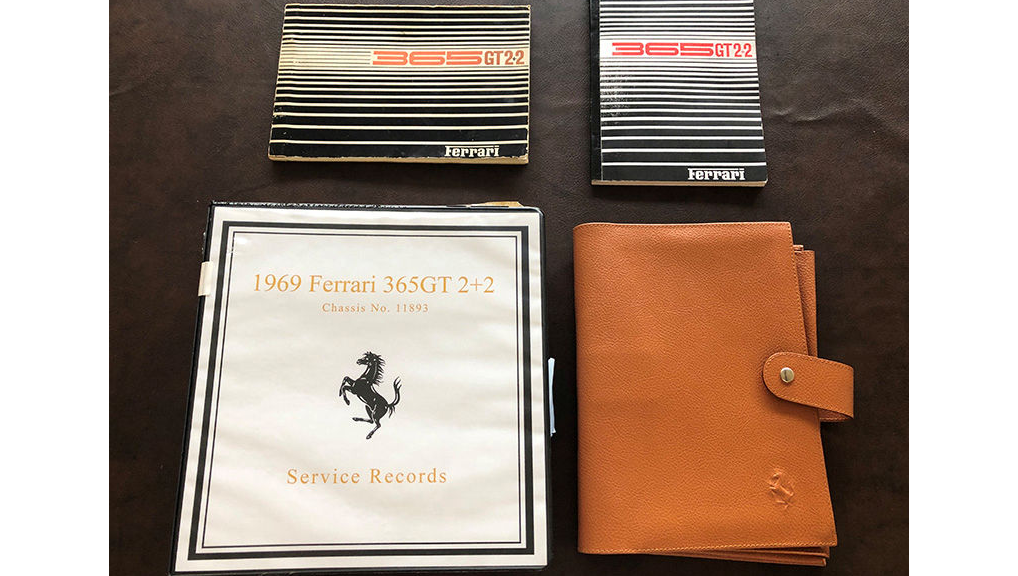 This particular car was delivered new into Torino, Italy to its first owner a Mr Schreiber in June 1969. The car was sold by RM Sotheby’s at their 2015 Monterey sale and the following history is an extract from their auction catalogue:

“The car offered here was built to European specifications, with left-hand drive and metric instruments, and it was delivered through Torino dealer Italcar S.A. to a local resident, Mr. Schreiber, in June 1969. It was registered as TO D 09929 and serviced and maintained by the Ferrari Factory Assistenza Clienti at Viale Trento Trieste in Modena.

At some point in the early 1970s, the car was exported to the U.S.A. and was acquired in 1974 by Richard S. Scarpellini, of St. Louis, Missouri, who drove it in the FCA Tour de Saint Louis in nearby Westport in September of that year. In 1979, it passed through Foreign Cars Italia of North Carolina to Jim Francis, of Roanoke, Virginia, and then to David G. Seibert, of Atlanta, Georgia, and Fred Von Basedow, of Moline, Illinois.

Von Basedow apparently owned the car until the late 1980s, when it was acquired by Ralph D. Crosby Jr., of California. Mr. Crosby displayed the car at the Newport Beach Concours d’Elegance in 1995, by which time it was reported to have undergone a complete restoration, including a bare-metal repaint in black, with new leather interior, carpeting, and headliner installed. When sold in 1997, it had reportedly completed only 2,000 miles since its completion.

Well-preserved since and reportedly still fully matching-numbers, including its original engine, this is a handsome example of a comfortable, powerful, adept grand tourer, offered with its original tool kit, owner’s manual, and jack.”

The car sold for US $363,000 (all in) against a pre-auction estimate of US $325,000 – $425,000, which at the time was just under AUD $500,000. The buyer was a Perth based entrepreneur who subsequently imported the car into Australia. At the time of purchase the odometer was at 23,144 km. The car changed hands and found its way to a collector based on the Gold Coast. A change in his circumstances has now resulted in this stunning car being offered for sale. Today the odometer reads 24,025km, so this car has only travelled some 850 km in the last 4 years.

Whilst the car is an older restoration it still presents beautifully today. The jet black paint work has a high gloss and strong depth of colour. There are a few small imperfections in the paint. The most noticeable is adjacent to the right hand vent on the front guard, which is a bubble the size of a five cent piece. There are other small imperfections around the car and small dent in the roof. The car is very clean underneath and it looks to be structurally good, though there is a small spot on the front left sill. All of the exterior trim, including the chrome, lenses and badges as well as the glass are in excellent condition. The car is fitted with a set of Starburst wheels which suit the car perfectly and are in excellent condition.

We love the interior of the 365 GT 2+2 and everything in the cabin of this car is stunning. The tan leather upholstery is gorgeous and essentially ‘like new’. It complements the black exterior perfectly. The dash, instruments and controls are also in excellent condition and everything looks to be in working order with the exception of the fuel gauge. The timber steering wheel as well as the timberwork on the dash and centre console is a feature on a 365 GT 2+2. They are beautifully presented on this car.

The big V12 starts relatively easily on this car and it idles smoothly, though we suspect it could do with a service and quite possibly a good old ‘Italian tune’ would do the job! The engine has a good oil pressure and it has plenty of power on tap. The gearbox is really good on this car and it moves up and down the box smoothly even when cold. The car handles and steers as one would expect and the brakes pull the car up efficiently and in a straight line. Whilst the 365 GT 2+2 is often referred to as the ‘Queen Mary’ due to its size, the car belies that when you are behind the wheel. Make no mistake the 365 GT 2+2 is a quick car that would be the ideal mode of transport to blast from Paris to Rome back in the day. What is surprising is that it would also be right at home blasting across the Swiss Alps!

The car has books including the leather pouch, tools, a jack kit and thick history file with receipts dating back to 1986 from when it was in the ownership of Mr Crosby Jr. There is also a Massini history report on file. There is no spare wheel.

Being left hand drive this is a truly world market car that presents a unique opportunity in this country.